Giorgos G. Spanos for WITH COURAGE FOR FREEDOM

When one of the 500 thousand sold out copies of the book Dare to be Free , by a New Zealand lieutenant named WB “Sandy” Thomas (1951), found a way to fall into my welcoming hands at the right moment, I didn't have to finish it to realize that I had to put everything else I had on the back burner prepared for years and the subdued period of the Greek crisis had dictated to me that the time had come for them to come to the surface.

I had set, since my adulthood, as a primary goal, along with everything else I would do, the recording and highlighting of true stories that would have the following characteristic: to surpass the imagination, by dissolving it, so as to provide true inspiration to the modern reader. I put aside his 3rd edition Fathers & Daughters , A Fatherhood Legacy (Athos Press, NY 2013), a comprehensive rendition of CS Lewis and my own Boniface, a trilogy of rich action by a real-life Jason Bourne-type hero, and a shocking journey of a friend's great-grandmother, from the uprooting of the Pontic Genocide in exile to its heroic uprooting in Greece in 1924. I decided without further ado to follow in his footsteps New Zealand hero and to confirm (or not) the exciting adventure he experienced in the Greek space-time of 1941-'42, from Crete to Athens, to Thessaloniki, to Mount Athos, to Smyrna and Syria.

For about two years, one surprise followed another as I found true all that Sandy Thomas modestly wrote a few years after the end of Nazism, and especially when I managed to locate the hero himself living at the age of 98 somewhere in Australia and to enrich, with as much clarity as he could, his narration even more with personal details that he himself had never mentioned before. For my part, honoring its history and the obvious dimensions it had, I enriched the text with all the important people and events that emerged or were confirmed by my research, and were seeing the light of day for the first time, e.g. the unknown atrocities of the Nazis in villages near Mount Athos and the association of Thomas with prominent monks of the heavenly neighbor Athos, who were severely punished for the help and escape they offered him and hundreds of other allies or Greeks, towards Asia Minor and the Egypt. Along the way, another small book appeared, the A Visit to Mount Athos , November 1944 (Athos Press, NY, 2015) in which I separately included all the rare audiovisual material discovered in the National Library of New Zealand. 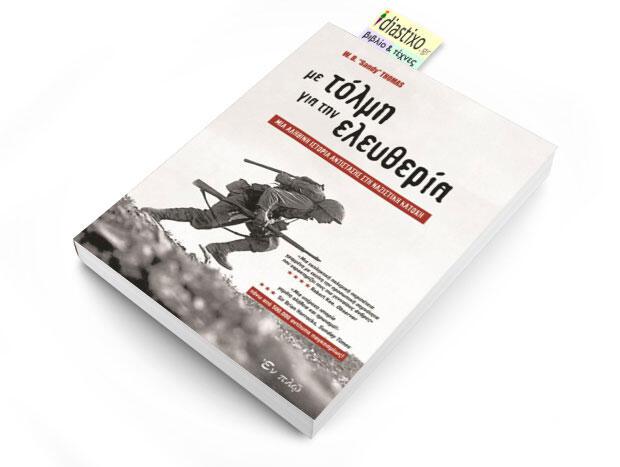 Today, the book Boldly for Freedom (En Plo editions, 2015), according to international critics "one of the most fascinating true stories of the Second World War" ( Observer , Sunday Times ) and according to others "a story whose quality of research and rendering perhaps even exceeds its original edition" (Thessaloniki International Book Fair, May 2016), glorifies the Greek soul and the impressive action of the Saints, as it did continuously for 75 years in various languages ​​around the world, and reminds us of the quality of our ancestors in the most difficult conditions of the Occupation...

Personally, the highlight of the effort is not the honorable reviews and positive opinions of the readers, but above all that the philhellenic Sandy Thomas declared to me with inner relief that "the publication in Greek of my story may have taken seven decades, but it is for me the most ideal completion of my life and illustrious military career, which I owe to the Greeks".

As far as I am concerned, I have chosen to present, and in writing, the present in the current era of Crisis, because I consider it the result of a chronic spiritual malnutrition that pushes today's people into an intellectual disorder and an anti-heroic spirit trying to convince us that we must once again accept a fate that is trying to be imposed by ephemeral conquerors.

Having spent a few years in the rear "headquarters", from the front line of entrepreneurship and an intense activity in transport, shipping, diplomacy, culture and, inevitably, politics (in the sense mainly of an active citizen), I started to form a rich and diverse material of experiences and knowledge.

I motivate and exhort, all who can write down for things worth saving to do so, even if they leave them in time capsules for future generations. The authorship is earned over time, whether it is published or not, by elaborating mainly on oneself, without competitive complexes against other authors, without ideological undermining against oneself, and without repetitive nuggets against one's prospective readers.

Let us all do our bit to create opportunities to indulge ourselves and bring to the surface all those forgotten or undervalued gifts that exist in our Greek genome, in all those from which we are made as a nation, in all those that can to rewire the neurons of our historical memory and cure our historical dementia so that we can revive. Even if the occasions will be taken from those, ungrateful, well-wishers, like Sandy Thomas, who will accurately remind us how inappropriate it is for us to look down on other peoples with an inferiority complex!